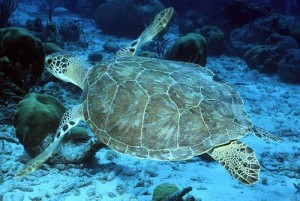 The threats to turtles come from many sources. They can become caught in the nets used for fishing as well as the lines associated with traps and pots. Turtles entangled in this gear often suffer serious injuries to their flippers and can even drown. In addition, long line fishing gear can even hook turtles. Other types of commercial fishing, like the use of heavy dredges dragged along the ocean floor, can crush and entrap turtles.

Pollution–everything from oil spills to common garbage–has also contributed to the decline of sea turtles. When turtles feed they can accidentally ingest marine debris such as tar balls, plastic bags, and balloons. They can easily become entangled in discarded fishing gear or other trash, like plastic six-pack holders.

But the threats to turtles are not only at sea. Loss of nesting habitats due to over-development has had a huge impact. Even things like excessive artificial lighting near beaches have an effect on turtles. When hatchlings emerge from their nests, natural instinct tells them to go toward the brightest light source, which would be the horizon over the ocean on a dark beach. If hatchlings wander away from the sea toward other light sources they are exposed to predators and can quickly become exhausted.

We encourage you to read more about the plight of sea turtles and find ways you can help. There is plenty of information out there but the National Oceanic and Atmospheric Administration is a good starting point.

So that sea turtles are never far from your mind, Beach Décor Shop is happy to offer many sea turtle home decor items that pay tribute to our favorite marine reptile. Check out Sea Turtle Glasses, Sea Turtle Outdoor Pillow  and don’t forget to help with the cause: 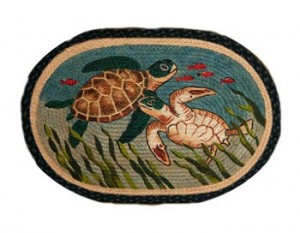 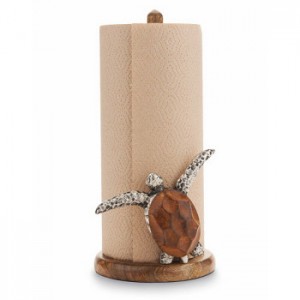 This entry was posted on Tuesday, June 10th, 2014 at 4:07 pm and is filed under Beach Travel. You can follow any responses to this entry through the RSS 2.0 feed. You can leave a response, or trackback from your own site.